WinWall: the video, the photos, the story of Laviosa Chimica Mineraria and the Carlo Laviosa Foundation project. The first installation in Livorno. 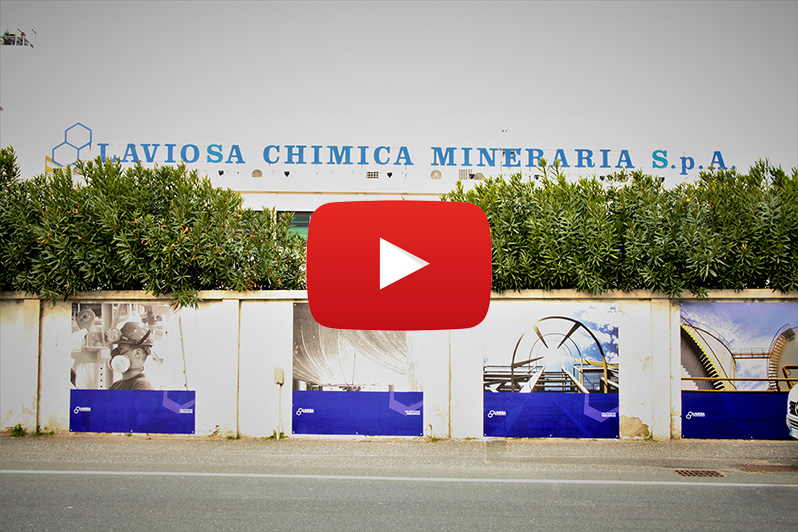 Walls protect, hide and demarcate. Often, walls divide and our recent history, indeed very recent, is full of examples of walls being erected in the name of some all-important cause. A wall is built, brick by brick; an opening can be added but a wall is never fully open. If it’s fully open it’s no longer a wall. But, but…in Livorno, Laviosa Chimica Mineraria and the Carlo Laviosa Foundation, working hand-in-hand, have symbolically opened a wall: the WinWall – an entire perimeter, permeable and transparent, yet unchanged materially.
Together, the industrial plant and the Foundation, have begun an ambitious experience which could, amongst other things write an interesting, new chapter in the relationship between the factory and its territory, bearing in mind that production, with its needs, rhythms and values characterises a territory, at times giving it identity but always being an essential element.
In such a context, a production site which asks the question, can give back to its territory not just in material terms but also in beauty, knowledge and meaning.

The recipe: to ask a photographer of great character and talent, such as Letizia Battaglia to lead a Foundation workshop for amateur photographers and to reveal the best of these photography enthusiasts’ passion. The Laviosa Chimica Mineraria landscape is the participants’ backdrop; the materials, the machines, the minerals, the people.
What results is a series of shots, which taken one by one are beautiful, expressive, inspired and full of photographic technique. Put together, they tell a tale full of surprises, just as a good story should be.
This is a tale of a place of work, the materials that make it, the machines that drive it, the people who bring it alive.
By chance, the wall surrounding Laviosa Chimica Mineraria needed repair, from where the idea to cover it with the photos from the workshop was born.
If we cannot do without the wall then let it talk through the images, transforming an “outside” into an “inside”. To passers-by we give the opportunity to see what it’s like inside, “through” the wall, adding their own personal view and emotions to those of the different photographers.
It happened thanks to the Carlo Laviosa Foundation and now Laviosa Chimica Mineraria has its beautiful WinWall.
A three-star recipe you can find at: https://youtu.be/wFY-iFWtDLM or directly in via Leonardo da Vinci, next time you’re in Livorno.