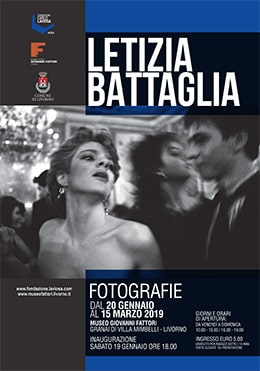 As part of the “Photography and the World of Work” project, in the spaces of the Granai di Villa Mimbelli at the Museo Civico Giovanni Fattori in Livorno and in collaboration with the municipality of the Comune di Livorno, the Carlo Laviosa Foundation proposes the exhibition of one of the most important figures in contemporary photography – Letizia Battaglia.

“LETIZIA BATTAGLIA – Photographs” brings together 50 photographs: pages of history, indeed historical documents, telling the story of a changing Italy. As the curator Serafino Fasulo explains, “the exhibition pathway is neither chronological nor thematic but rather follows a thread weaving between the atrocious and the beautiful, revealing the archetypes which give rise to human actions”.
“The work of Letizia Battaglia (a young woman of 83), he continues, has often been summarily labelled as a chronicle of the Mafia homicides but this is limiting her scope as an artist. Yes, Battaglia has been a photographer of the trenches (nomen omen) but she has also lit up and enriched our lives with her incessant search for beauty and dignity. Her photos speak of the pathos of Greek tragedy, of suffering and the sublime”.

Letizia Battaglia’s preferred mode of communication has always been the rigour of black and white. She says she doesn’t like colour: “still today, just thinking about the red colour of blood, makes me feel ill. I believe black and white is more silent, solemn and respectful. Even when I look at others’ photographs, I look for black and white. It’s an artistic preference for the means and the final result”. Yet, in her photographs, Paola Tognon suggests in her catalogue critique, “it’s not black and white in the sense of good and bad and even less so “do-gooder” and moralising piety. On the contrary, thanks to the typical, decisive contrast of her images, what we see is all evidence of the complexity of the human condition (…). Many of her images give us a piece of a context, a part of her Palermo, abandoned and found again, rising to the exemplification of a unique stage and universal set of the human story”.

For Battaglia, photography is born of ethical urgency and is closely linked to life. For her, taking a photograph means getting close to others to recount their pain. “It isn’t a coincidence that she uses a wide-angle lens, giving depth to the image, with the protagonists in the foreground, as if we were their neighbours or partners, sharing a moment in the journey of life”, Father Andrea Dall’Asta emphasises in his contribution to the catalogue.

At the exhibition, next to shots testifying to certain salient facts in the history of Italy, are portraits of everyday Palermo, women and children but also of high-society receptions bring the charm of The Leopard’s aristocratic Sicily back to life.

“Letizia Battaglia” – the catalogue accompanying the exhibition – in addition to institutional contributions, includes critiques by Andrea Dall’Asta, Director of the Galleria San Fedele in Milan, Paola Tognon, Scientific Director of the Musei Civici Livorno museums and Serafino Fasulo, Artistic Director of the Carlo Laviosa Foundation. All funds raised from the sale of the catalogue at the Museum Bookshop are donated entirely to the project “Photography and the World of Work”.

Born in Palermo in 1935, Letizia Battaglia is a photographer, artist, film director, ecologist, politician, publisher and one of Italy’s first female photo-journalists. In 1974 she began her career as a photographer for Palermo’s daily newspaper L’ORA and with her colleague and partner Franco Zecchin, founded the agency “Informazione Fotografica”. Frontline journalist, she documented a Palermo where the Mafia defied the State, settling its own scores and laying down its own bloody laws throughout the territory. She immortalized police officers, judges and the civil servants in the frontline of the battle against Cosa Nostra. Her legacy are the photographs of Giorgio Boris Giuliano, General Dalla Chiesa, magistrates Falcone and Borsellino, as well as.the President of the Region of Sicily Piersanti Mattarella with a portrait of him just murdered, lying in his brother Sergio’s arms. (Sergio is now the current President of the Italian Republic). Her photos include portraits of intellectuals such as Pier Paolo Pasolini and Ezra Pound. She befriended great photographers such as Diane Arbus, Sebastião Salgado and Josef Koudelka. Letizia Battaglia recorded fourty years of Italian life and society; always being where a story needs to be told, be it at skirmishes in piazza or Mafia murders, in prisons or psychiatric hospitals. But, she declares, her favourite subjects remain women and children. In 1985 she became the first woman to receive the Eugene Smith award for photojournalism (an annual, international prize in memory of the late, eponymous photographer of Life Magazine, for outstanding photography in the domains of politics, the environment, the economy and society. In 1991 she founded the bimonthly magazine “Mezzocielo” created solely by women and in 1999 she won the “The Mother Johnson Achievement for Life”, San Francisco. The German Photographic Association (DGPh) awarded her the Erich Salomon Prize in 2007, Peace Women Across the Globe named her one of the 1000 women nominees for the Nobel Peace Prize. In 2017 the New York Times listed her (the only Italian woman) among the 11 most influential women in the world and MAXXI Rome honoured her with an anthology gathering over 200 shots, vintage proofs and previously unpublished documents. Other than in Italy, Letizia Battaglia’s work has been exhibited in Eastern Europe, France (Centre Georges Pompidou, Paris), the United Kingdom, America, Brazil, Swizerland and Canada and she continues to lecture and hold workshops for museums and institutions across Italy and Europe. Since 2017 she has directed and curated the photographic exhibitions and events for historic and contemporary photography at the Centro Internazionale di Fotografia (the International Centre for Photography), at the Cantieri Culturali alla Zisa in Palermo, Sicily.